At the closing session of the G20 summit in Bali, Indonesia, Prime Minister Narendra Modi officially took over the presidency of the group and promised to make it a “catalyst for global change” at a “time when the world is simultaneously grappling with geopolitical tensions, economic slowdown, rising food and energy prices and the long-term ill-effects of the pandemic”.

At the closing session of the G20 summit in Bali, Indonesia, Prime Minister Narendra Modi officially took over the presidency of the group and promised to make it a “catalyst for global change” at a “time when the world is simultaneously grappling with geopolitical tensions, economic slowdown, rising food and energy prices and the long-term ill-effects of the pandemic”. India’s official presidency of the G20 will start from December and India will host the next annual meeting of the group in September 2023.

What exactly is the G20? How important is this group in the world and has it undergone any changes since it came into being? Here are four charts that explain this in detail.

This is the single most important statement about the G20’s economic importance in the global economy. To be sure, the formation of G20 was about diversifying the economic leadership of the global economy rather than concentrating it. In the wake of Asian Financial Crisis in 1999, finance ministers and central bank governors of the Group of Seven countries (G7) – it is the club of advanced economies in the world – announced their intention to “broaden the dialogue on key economic and financial policy issues among systemically significant economies and promote co-operation to achieve stable and sustainable world economic growth that benefits all”(https://bit.ly/3Gkr6xD). This announcement marked the official birth of what subsequently came to be known as the Group of Twenty countries (G20). The first official meeting of the G20 leaders took place in Washington D.C in 2008, and since 2011, the G20 summit has been held annually with member countries taking rotational presidencies.

Data from the International Monetary Fund shows that the G20 economies together accounted for 85% of the global output in 2022, which is marginally lower than the 89% output share this group had in 1999. However, the economic dominance of this group becomes evident if one were to look at the population share of these economies in the world. In 2022, the G20 economies accounted for slightly more than 60% of the world population (62%), meaning that 40% of the world population share and live within the remaining 15% of the global output. The share of G7 countries in global GDP and population is 43% and 9.8%, which underlines the central faultline in the global economy -- inequality. 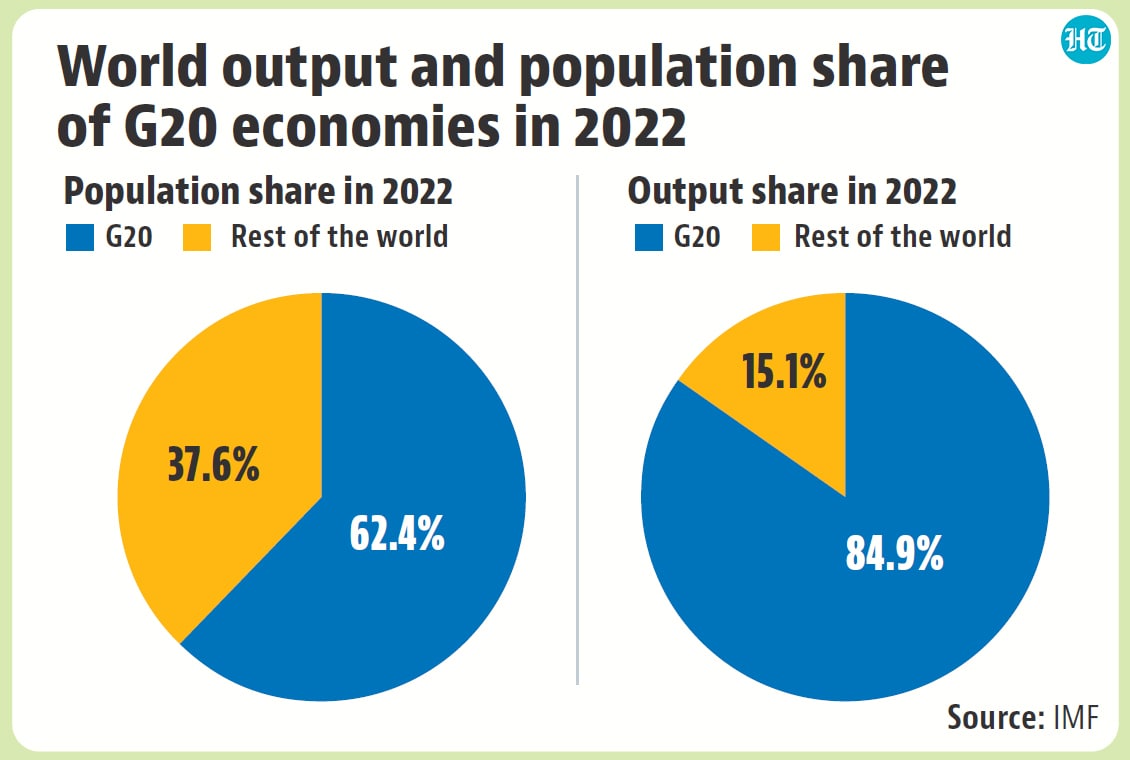 Emerging markets and India have increased their economic weight within G20

The pandemic has affected the economies of these G20 nations differently. A comparison of the latest GDP numbers with the GDP numbers before the beginning of the pandemic shows this. While few advanced countries (Australia, South Korea) and few emerging economies (Turkey, China, Indonesia) showed significant economic recovery, some countries still lag behind their pre-pandemic levels. To be sure, even in 2022, the GDP of Mexico, Russia and Turkey are expected to be behind their 2019 levels by 1.6, 1.5 and 1.4 percentage points respectively, shows IMF data. India’s GDP in 2022-23 is expected to be 8.5%, higher than its 2019-20 GDP according to IMF projections.

Just as the global economy was making a recovery from the impact of the pandemic, the Russia-Ukraine war caused yet another disruption. Once again, the impact has been different across member countries. A comparison of growth projections for the major G20 nations before the rise of the war in Ukraine, and the latest projections clearly shows this. If one takes IMF’s World Economic Outlook published in January 2022 as the benchmark for growth outlook before the beginning of the war and compares them with IMF World Economic Outlook’s October 2022 projections, it can be seen that projections for 2022 have been revised down for major G20 economies, except Brazil, Saudi Arabia and South Africa. Even among the group of economies whose projections were revised down in October, the growth revision for the US and Germany in 2022 are the highest (2.4 and 2.3 percentage points respectively). This comparison excludes Russia.

India takes the presidency of the G20 at a time when it is expected to be the fastest growing major economy in the world . It remains to be seen whether it can convince the leaders of this important group to take coordinated action on economic issues that include both short term problems such as the energy price crisis as well as structural problems such as finding common ground on issues of climate finance.