Heatwaves persist but some areas remain cooler than average

On May 15, Delhi’s Mungeshpur automatic weather station recorded a maximum temperature of 49 degrees Celsius, perhaps the highest ever recorded temperature in the capital – these automatic weather stations only became operational this year so there is no past data for this locality. To be sure, temperatures were rising over the past week after a brief relief due to rain on May 5 and 7. The plight of Delhi and large parts of north-west and central India is in sharp contrast with large parts of the country, which were actually cooler than historical average in the second week of May. The biggest reason for this regional divergence in heat or lack of it is divergence in rainfall patterns. Here are six maps which explain this in detail.

Once this comparison is made, both the last week and the first eight days of May have actually been cooler than historic averages, unlike the last week of April.

Just because a grid shows a maximum temperature which is higher than the historical average does not mean that it is in the grip of extreme heat. This is because the average temperature itself can be at pretty comfortable levels. This makes it important to track actual temperature levels to get an idea of the regions which actually faced extreme heat. In the week ending May 15, 22 grids had average maximum temperature of 45 degrees Celsius or above. There was no such grid in the period between May 1 and May 8. The number of grids which recorded average maximum temperature of 42.5 degrees and above increased from 29 in the period between May 1 and May 8 to 75 in the week ending May 15. 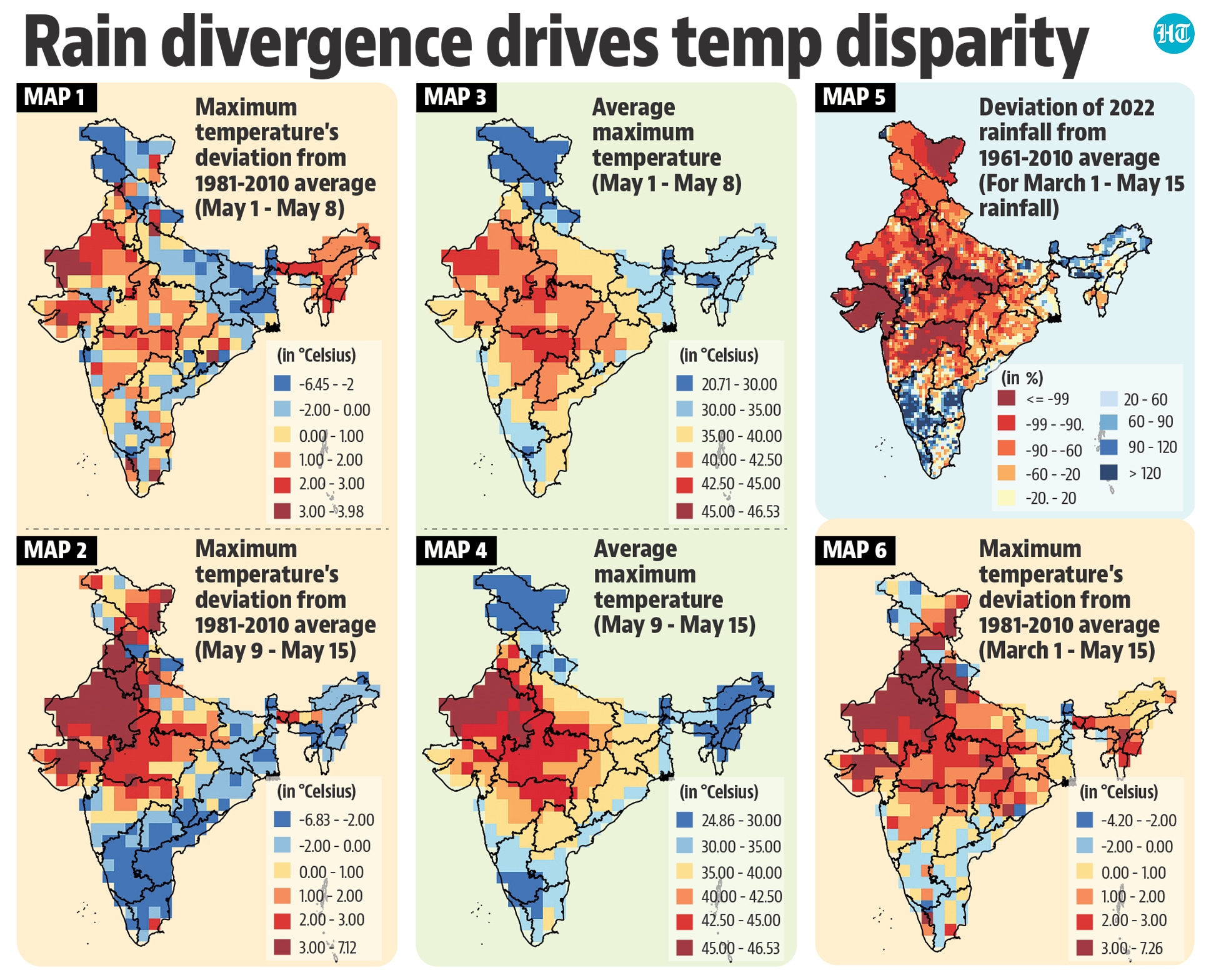 The temporary relief in the first week of May notwithstanding, most parts of northern and central India have been witnessing a severe summer this year. The premature onset of summer and its severity has been an important factor behind the drop in wheat yields. One of the biggest reasons for this hotter than normal summer is the lack of rainfall since the month of March. This is best seen by looking at two maps which track deviation in rainfall and maximum temperatures between March 1 and May 15. The geographical reason for lack of rainfall in north western India has been the absence of western disturbances, which has been made worse by the onset of cyclone Asani in the Bay of Bengal which pulled cool air towards itself and allowed hot air from the western desert to sweep in.

Some places in India have not received a single day of rainfall since March. The maps above show deficits instead of actual rainfall because low rainfall in itself is not surprising in the March 1- May 15 interval. In the 1961-2010 period, most of India received only up to 10 days of rainfall in these summer months. The departure of 2022 from this is that rain fell on even fewer days. As is expected, it has not rained since March on a single day in the regions that have a deficit of 99% or more. Most places in north-western and central India that received rainfall for 4 to 10 days in 1961-2010 have received only up to two days of rainfall this year. In some places, the lack in distribution of rainfall is likely to have been more extreme than the lack in rainfall itself. Delhi is an example of such a place. The 6.05 mm rainfall Delhi has received since March 1 is the 20th lowest since 1901, according to IMD’s gridded dataset. However, all of this rainfall took place in just two days, which is much rarer. Only in six years, has it rained on fewer days in Delhi in the March 1- May 15 interval. In 1921, it did not rain on any day; and in 1922, 1930, 1938, 1959, and 1992, it rained on just one day. Even the other years with which 2022 shares the just-two-days-of-rainfall record belong to a much earlier period: 1923 and 1954.

SHARE THIS ARTICLE ON
Topics
health
health
Subscribe to our best newsletters
Subscribed to newsletter successfully
Thank you for subscribing to our Daily News Capsule newsletter.
Close Story