PFI: A 16-year-long history of rows and terror charges

On Friday, the National Investigation Agency (NIA), Enforcement Directorate (ED) and state police forces conducted coordinated raids across 15 states and one Union Territory in India in a massive crackdown against the organisation, arresting over a 108 PFI members from across the country.

Founded in Kerala in the year 2006, the Popular Front of India (PFI) has seen exponential growth, spreading its wings to 22 states across India, out of which has even sprung a political offshoot that contests elections. Yet, for much of this decade and a half, the organisation has been shrouded in controversy, with allegations of “radicalisation” and involvement in violence, with the Kerala government telling the High Court in an affidavit in 2012 that the PFI was “nothing but a resurrection” of the banned Students Islamic Movement of India, SIMI.

On Friday, the National Investigation Agency (NIA), Enforcement Directorate (ED) and state police forces conducted coordinated raids across 15 states and one Union Territory in India in a massive crackdown against the organisation, arresting over a 108 PFI members from across the country.

Experts say that there are two clear markers that led to the creation of the PFI. One, the demolition of the Babri Masjid in 1992 that led to a wave of communal unrest in India, and second, the eventual ban on the SIMI in early 2001. Five years after this, the PFI came into existence, merging the National Development Front of Kerala, the Karnataka Forum for Dignity and the Manitha Neethi Pasari of Tamil Nadu, as well as several erstwhile members of SIMI.

One of the key architects of this merger was professor P Koya (68), a retired English teacher from Kozhikode, and now one of its key ideologues. Koya was one of the 22 men arrested from Kerala on Thursday. In an interview to HT in 2017, Koya had said that a “growing disparity and exploitation of the community in the country had forced people like him to float an outfit to regain its pride.” In 2009, out of the PFI also emerged its political wing the Social Democratic Party of India which has contested elections, primarily in Karnataka.

In 2014, two years after the Kerala Government told the High Court that the PFI was the resurrection of SIMI, it also told the court that the PFI wanted the “Islamisation of society by promoting conversion, communalisation of issues with a view to the benefit of Islam, recruitment, and maintenance of a branded committed indoctrinated Muslim youth for undertaking actions including selective elimination of persons, who in their perception are enemies of Islam”.

Soon after its formation, the PFI began to expand, first to the other southern states.Today, the organisation has offices in 22 states, including a headquarters in Delhi, and had a reach that extends as far as Manipur in the north east, one of the locations to be raided on Thursday. 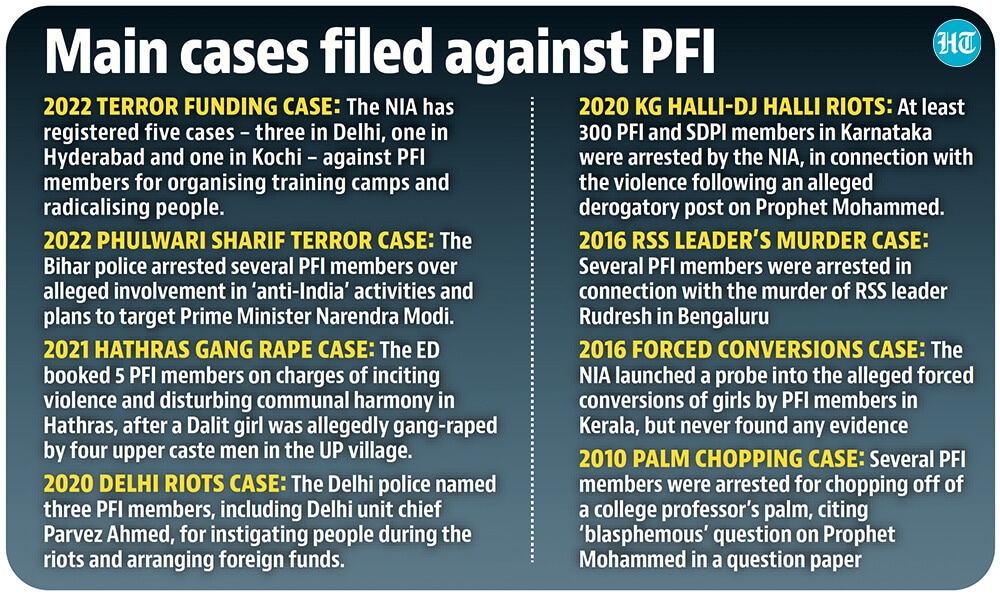 PFI has a uniform for its cadres, conducts drills in public places, and often holds “unity” marches in district headquarters in Kerala in a show of strength. In 2013, the Kerala government banned this parade, claiming that it would create a law and order issue.

Over the years, the PFI has found itself shrouded in allegations of violence and murder, most with communal undertones. Records of the Kerala government have the organisation linked with as many as 30 murders since its inception. In one of the most high profile cases of violence that brought national attention to PFI, 13 PFI activists were sentenced to life imprisonment for allegedly chopping off the hands of Professor T J Joseph, a Malayalam teacher in New Man’s College in Ernakulam’s Muvattupuzha in July 2010, for preparing a question paper that they saw as blasphemous.

Most recently, Alok Kumar, the Additional Director General of Police of the Karntaka police said that the alleged killers of BJP leader Praveen Nettaru in Bellary on July 26 this year had links to both the PFI and SDPI. Ten people have been arrested in the case thus far. In 2016, five people, including Bengaluru district president of PFI Azim Sheriff, were arrested for the murder of RSS man Rudresh in Bengaluru’s Shivajinagar. The Karnataka police have also accused the PFI of being involved in a violent clash in Bengaluru’s DJ Halli area on August 11, 2020 which left four people dead. The organisation has also been accused of instigating the controversy that raged in Karnataka in February 2022, which saw Muslim girls in educational institutes in the state insisting on wearing the Hijab.

In the Supreme Court, the Uttar Pradesh police has also maintained that jailed journalist Siddique Kappan, who was picked up on his way to Hathras to visit the home of the Dalit girl who was raped and killed in September 2020, had “deep links” with the PFI, and was going there to foment trouble. Kappan, who was booked under charges of UAPA and sedition, was given bail by the apex court on September 10, 2022.

The PFI has however consistently rejected these charges. In a statement issued on Thursday, it said that it would “never surrender” and that the NIA’s “baseless claims and sensationalism are solely aimed at creating an atmosphere of terror.

SHARE THIS ARTICLE ON
Topics
ht exclusive
ht exclusive
Subscribe to our best newsletters
Subscribed to newsletter successfully
Thank you for subscribing to our Daily News Capsule newsletter.