india news
How did the labour markets recover when lockdown restrictions were removed? Has the pandemic left long-term scars for India’s workers?
Share Via
Copy Link
ByAbhishek Jha

New Delhi: The biggest economic disruption due to the Covid-19 pandemic in India was on account of the 68-day hard lockdown imposed on March 25, 2020. Among other things, the lockdown triggered a huge wave of reverse migration of workers, leading to a sharp rise in unemployment and loss of incomes. How did the labour markets recover when lockdown restrictions were removed? Has the pandemic left long-term scars for India’s workers? An HT analysis of the 2020-21 Periodic Labour Force Survey (PLFS) report shows that the pandemic’s impact on Indian workers is more qualitative than quantitative, and mechanically reading the trend in unemployment rates could lead to wrong conclusions. Here are four charts which explain this in detail.

PLFS follows a July-June calendar. Therefore, the 2020-21 PLFS is the first PLFS to cover only the period of the pandemic beyond the harsh 68-day lockdown imposed in March 2020 to curb Covid-19 infections. During this period, the headline unemployment rate – for the 365 days before the survey – declined from 4.8% in 2019-20 to 4.2%. The 2020-21 unemployment rate is the lowest since 2017-18 PLFS when it was at 6.1%. Because the fall in unemployment rate has been accompanied by a rise in Labour Force Participation Rate (LFPR), which looks at the share of population either employed or looking for a job, this is not a result of people dropping opting out of the labour market. From a purely unemployment rate perspective, the latest PLFS numbers suggest that the labour market has actually improved after the pandemic. 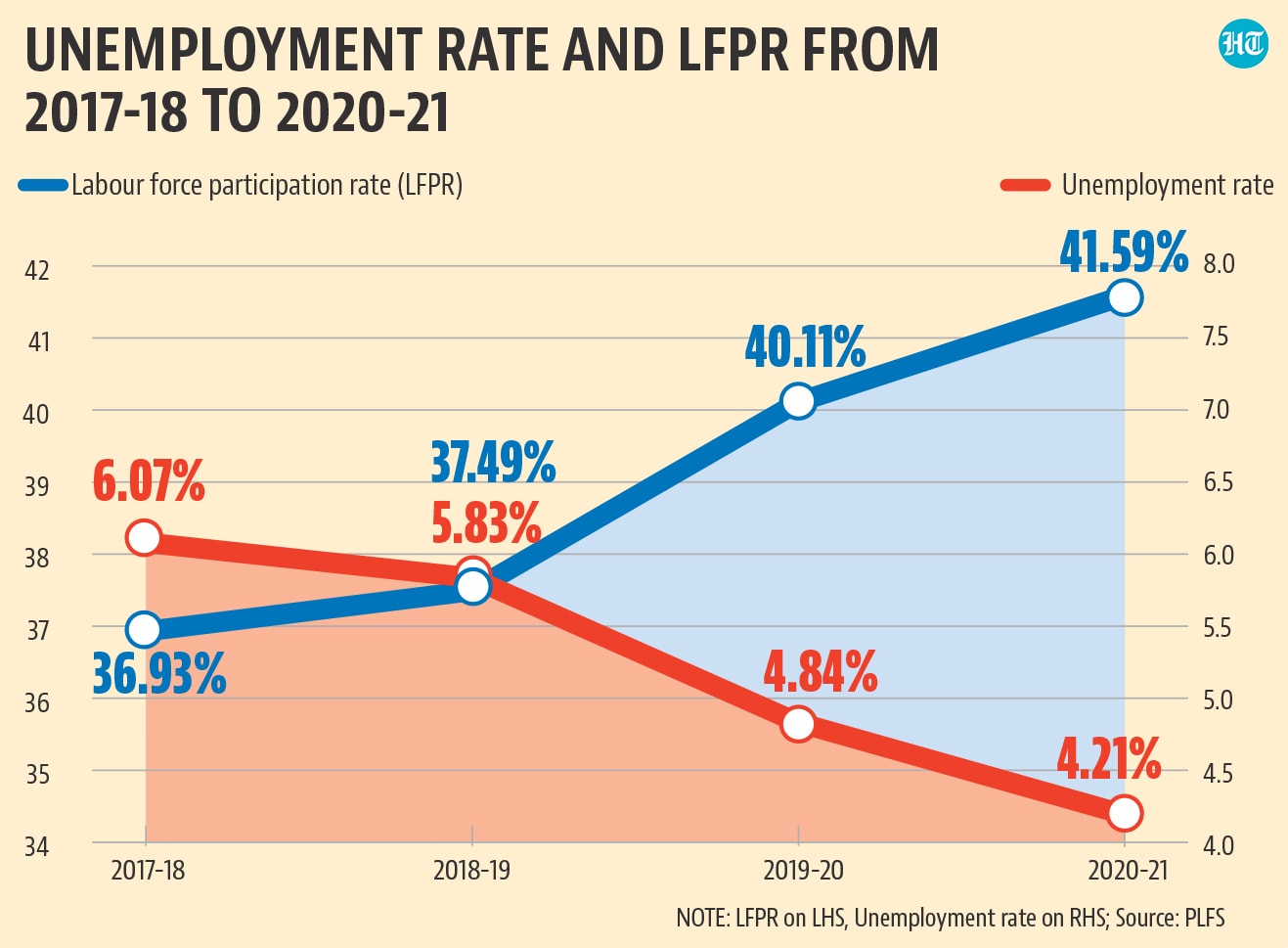 ....but there has been a shift towards low-quality and unpaid jobs

Emerging market economies such as India do not have unemployment allowances like advanced economies do. This means that staying unemployed is not a choice a lot of people can afford. This makes it important to look at the quality of jobs to assess the state of labour markets. It is on this count that the latest PLFS highlights the pandemic’s adverse after-effects. The share of workers in regular/salaried jobs – they are the best-paid workers in the Indian economy – fell to its lowest since 2017-18, the first year for which PLFS data is available. This number was increasing till 2018-19. To be sure, the pandemic also led to a decline in the share of casual workers in the economy, and the only category of workers that saw a rise was the self-employed cohort. The rise in share of self-employed workers, to be sure, does not suggest a sudden spike in entrepreneurial spirits in the Indian economy. Rather, it was a distress-driven change in occupations with a sharp rise in the share of unpaid family workers in the self-employed category. 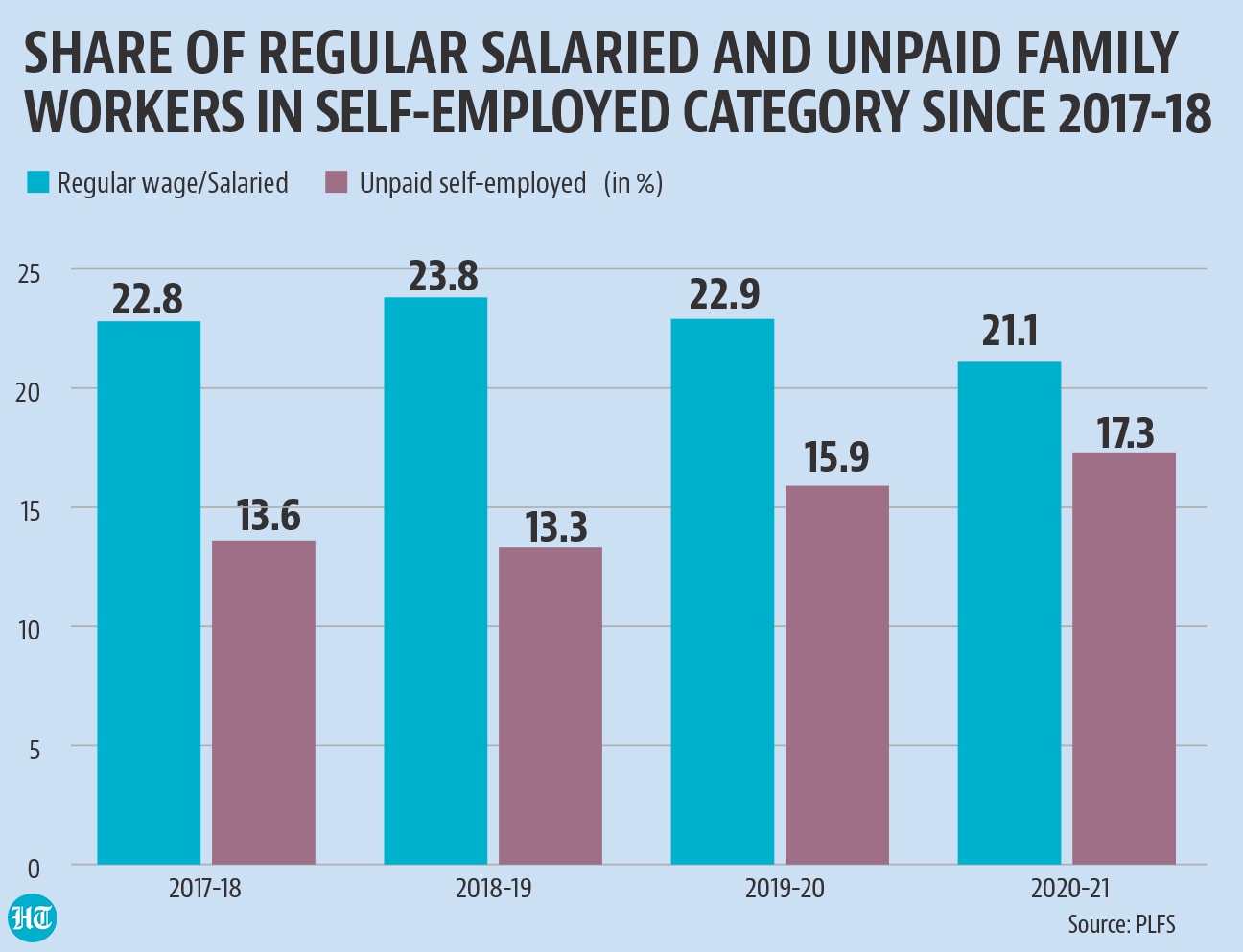 The 2019-20 PLFS – it covered the hard lockdown period which began on March 25, 2020 – led to an increase in the employment share of agriculture in India for the first time. This was seen as the result of the reverse migration forced by the lockdown. This number increased further in the 2020-21 PLFS, suggesting that those who came back to the villages were not able to return to non-farm occupations even as lockdown restrictions were removed. The fact that manufacturing’s employment share came down to its lowest level since 2017-18 further corroborates this thesis. Real wages came down across sectors

The average real wage of a regular salaried worker and incomes of self-employed workers (excluding the category of unpaid self-employed workers) did not recover to pre-pandemic levels by 2020-21, the latest PLFS data shows. To be sure, casual workers did see a small increase in their incomes, but they were still the least paid in the economy. The weakness in real wages seen in the PLFS data is in keeping with the argument of the post-pandemic recovery being profit-led rather than wage-led. 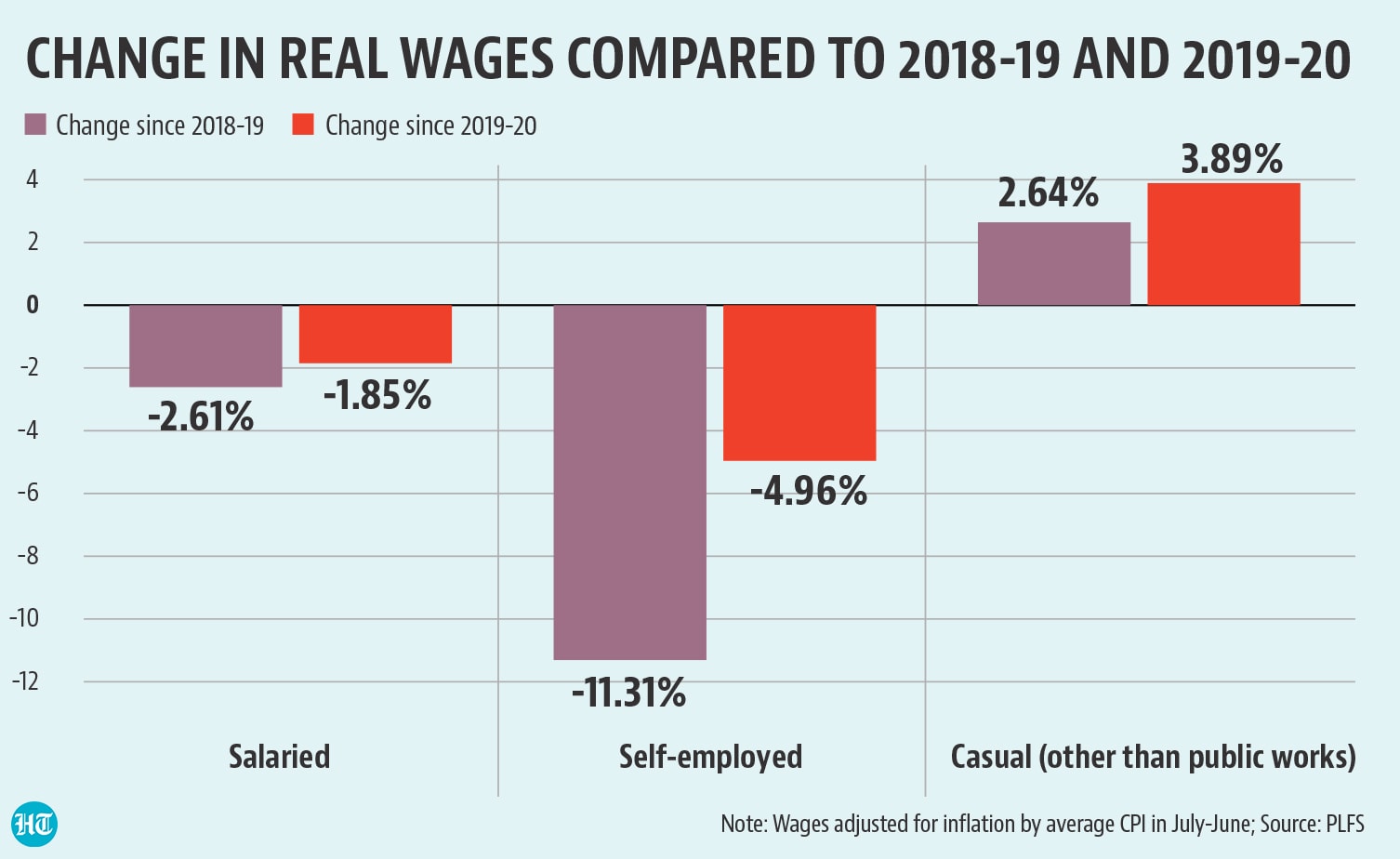 Enjoy Unlimited Digital Access with HT Premium
Grab the Offer Now
Already Subscribed? Sign In
SHARE THIS ARTICLE ON
Subscribe to our best newsletters
Subscribed to newsletter successfully
Thank you for subscribing to our Daily News Capsule newsletter.
Close Story