Anecdotally, the month of March (the period between March 1-30) was unusually hot and dry for people who live in two of India’s largest metropolitan cities – Delhi and Mumbai. Statistically, however, according to data analysed by HT, the picture is a little muddier. The average day temperatures – or the maximum that is recorded -- for the month for Delhi (33.2°C) was only the eighth warmest since 1951. In the case of Mumbai (33.5°C), the average day temperature was in fact cooler than usual -- in fact, it was the 24th coolest March in terms of day temperatures since 1951.

Home in further on the daily recordings and the signs of the anecdotal heatwaves are clearly supported by data.

The hottest of days were not evenly spread across the month for either city, but instead occurred sporadically. Mumbai, for instance, saw its hottest March 14 ever, with a maximum of 37.9°C, as opposed to the normal high of 34.1°C. After the hot spell in the middle of the month, however, the heat relented slightly. The average maximum temperature for Mumbai in the week ending March 30 was 33.1°C, 5.1% less than the normal value of 34.9°C.

These temperature values are from the India Meteorological Department’s gridded dataset and cover an area slightly bigger than the two cities, including all their neighbouring districts. This is because these grids – a box bound by latitudes and longitudes a degree apart – are roughly squares (which these metros are not) and bigger than their administrative boundaries. 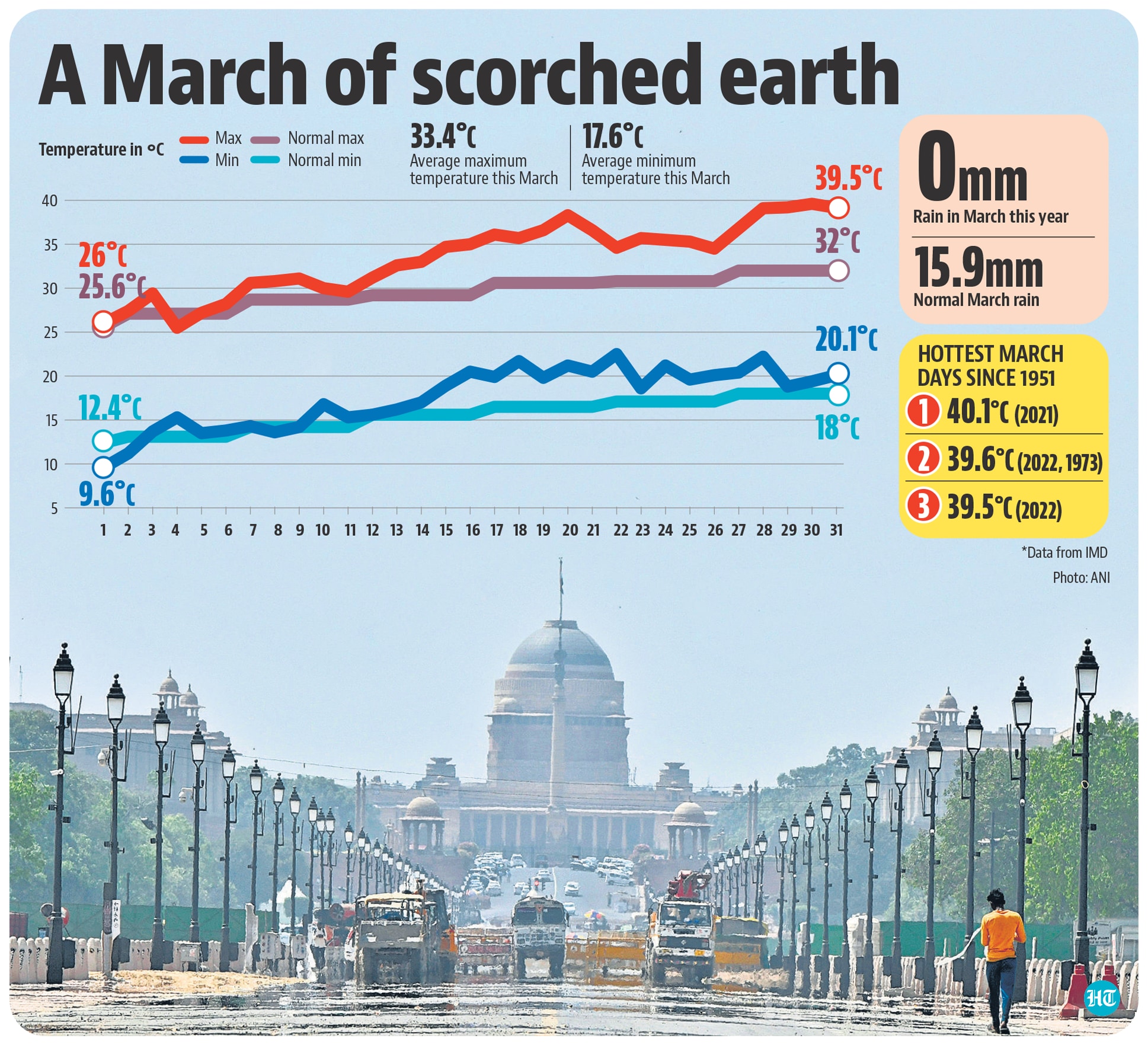 What explains these temperatures in Delhi and Mumbai?

For Delhi, and much of north-western India, the heat was because of hot winds from the west (called westerlies). On the other hand, coastal parts of states such as Maharashtra and Kerala have been hot because of dry winds blowing from the east (called easterlies), said DS Pai, director of Institute for Climate Change Studies, Kerala.

The way these winds can cause high temperatures is by disrupting typical atmospheric conditions. Westerlies bring warm winds from the deserts over Rajasthan and further afield, Pakistan and Iran. This means the typically cooler winds from the Himalayas in the north do not reach the north-western plains.

In the case of Mumbai, a westerly wind would have helped. But the easterlies that were sweeping over the region, however, blocked winds from the west, from the much cooler Arabian sea.

“Generally, the characteristics of coastal area is that relative humidity is high because of moisture. This time it was dry,” Pai said, a sign that showed how what could have cooled Mumbai was missing. As an HT report on March 17 pointed out, the heatwave in Mumbai started abating after this humidity increased again.

These winds also meant that there was a significant dry spell, which in the north is seen to be linked with several wildfires that have broken out. In north-west India, the deficit of rain for the March 1-30 period was 89%, IMD data showed.

SHARE THIS ARTICLE ON
Subscribe to our best newsletters
Subscribed to newsletter successfully
Thank you for subscribing to our Daily News Capsule newsletter.
Close Story