Number Theory: The state of the Indian economy in four charts

What do the latest numbers, analyst forecasts, and high-frequency data tell us about the state of Indian economy?

The National Statistical Office (NSO) released GDP numbers for the quarter ending September 2022 on November 30. GDP growth for the second quarter is 6.3%, which is exactly what the Monetary Policy Committee (MPC) of the RBI projected in its September resolution. What do the latest numbers, analyst forecasts, and high-frequency data tell us about the state of Indian economy? Here are four charts which explain this in detail.

The base effect is over

Two back-to-back disruptions because of the pandemic – the first was because of a 68-day long nation-wide lockdown which started on March 25, 2020 and the other, due to the second wave of the Covid-19 pandemic which peaked in May 2021 – have introduced a complicated base effect in the quarterly GDP numbers. The waning of base effect is the biggest reason behind the large moderation in GDP numbers between the June and September quarters this year. Having said this, it needs to be acknowledged that almost all institutional and private forecasters have made a downward revision to their growth forecasts for India’s GDP growth. Even the MPC, which was spot on in its GDP projection for the September quarter, expects growth in the December 2022 and March 2023 quarters to be just 4.6%. 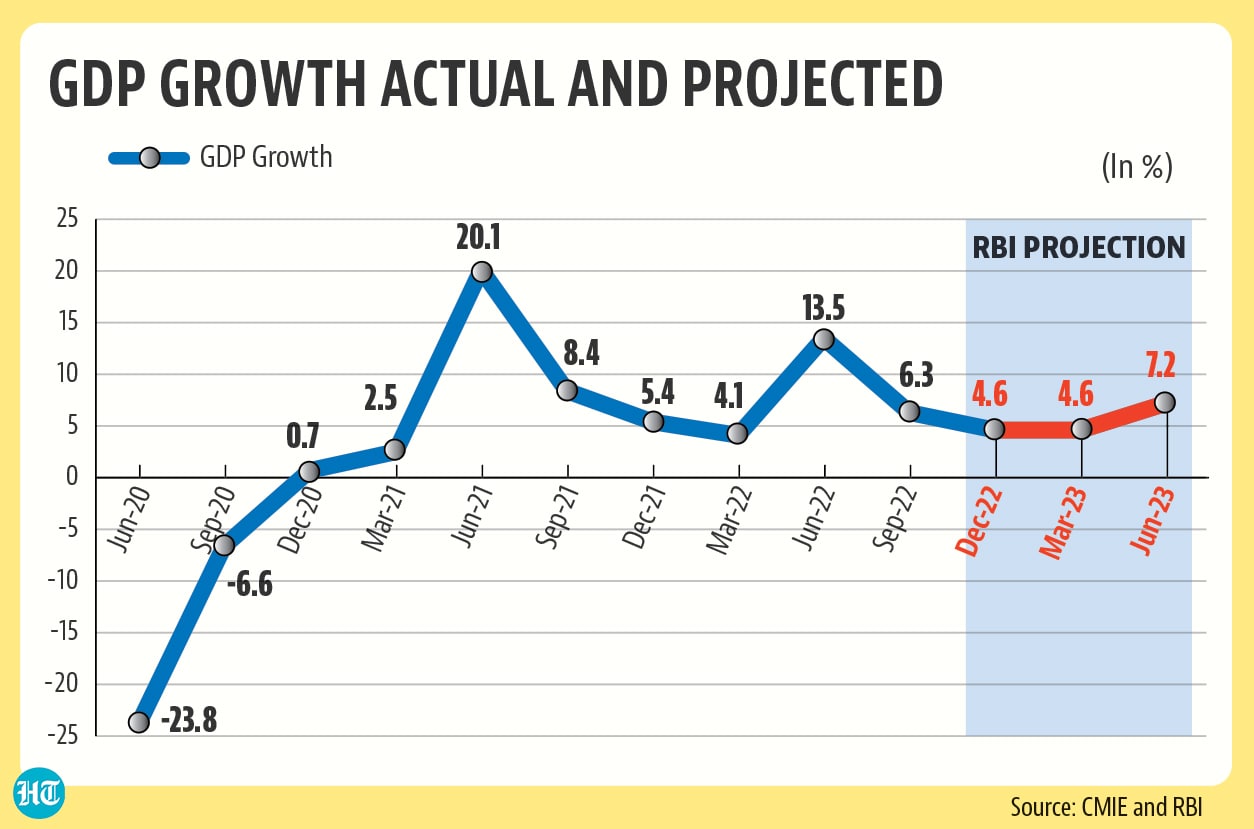 K-shaped recovery in manufacturing continues to be a concern

The biggest proof of this is seen in the large divergence between the manufacturing sector’s performance in the GDP statistics and the Purchasing Managers Index (PMI) for manufacturing. The latter is more likely to track formal sector activity while the GDP numbers are more representative of all activity, including that of the informal sector which consists of smaller firms. Manufacturing PMI was above the critical threshold of 50 – it suggests an improvement in economic activity compared to previous month – in all three months in the September quarter. However, the manufacturing sub-component of Gross Value Added (GVA) contracted by 4.3% on an annual basis in the September quarter. The latest manufacturing GVA number is the second consecutive sequential contraction in manufacturing activity in the economy. The fact that October PMI manufacturing came in at 55.3 whereas growth of eight core sector industries was just 0.1% suggests that the divergence in performance of various manufacturing firms might be continuing. To be sure, the service sector economy seems to be doing well as its various sub-sectors posted impressive growth in line with the services PMI numbers. 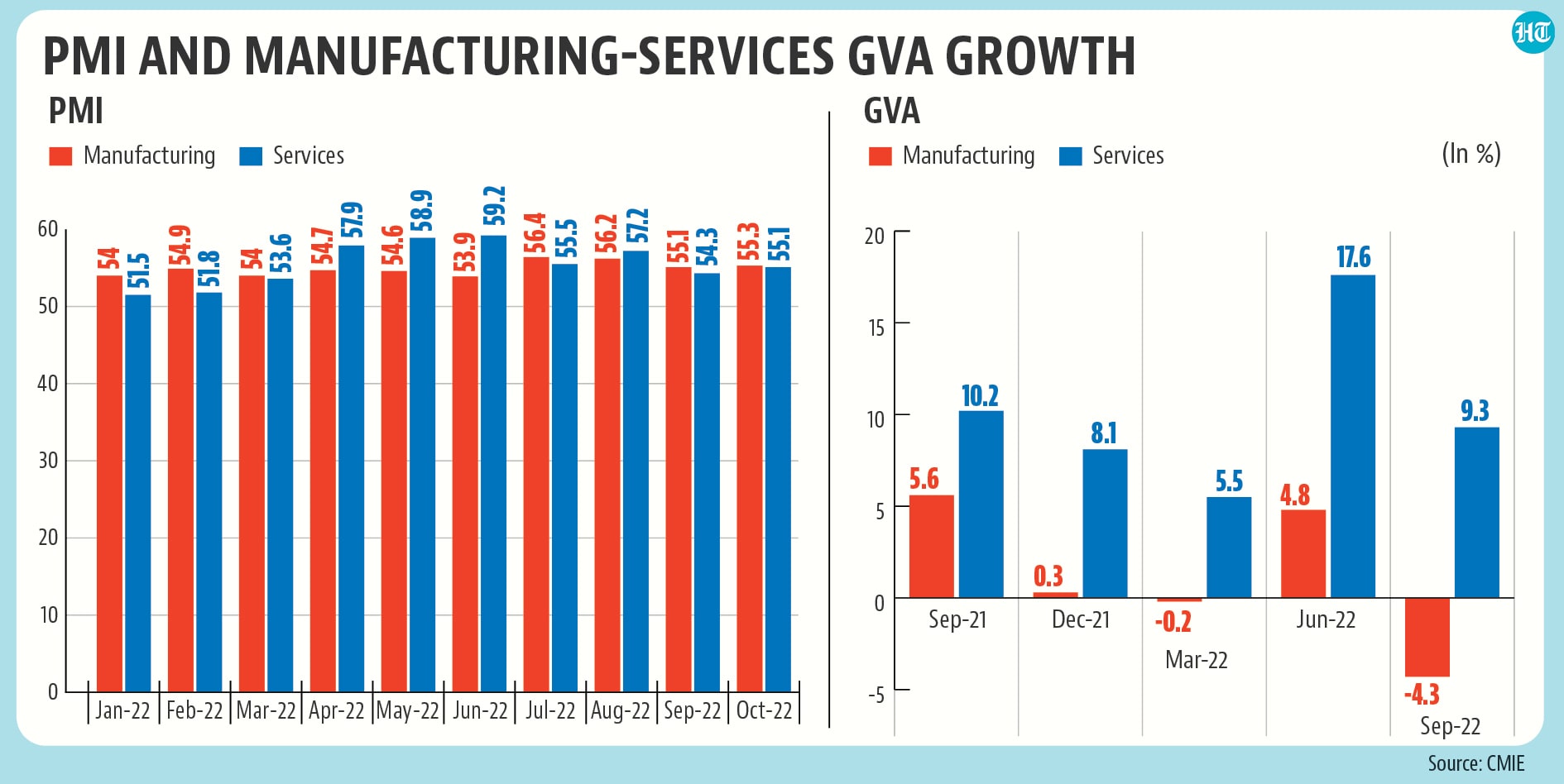 Robust agricultural growth does not seem to be helping rural wages

While agricultural sector continues to post strong growth, despite some extreme weather events, the 4.6% print in September print for GVA in agricultural and allied activities is the highest since March 2020 has not boosted earnings for rural labourers. Real rural wages contracted for the tenth consecutive month in September 2022, the latest moth for which data is available. When read with the contraction in manufacturing output in the September quarter, this raises a question whether the weakness in rural labour markets is a reflection of weak urban demand.

While inflation has been a major worry for policy makers, one area where is has actually helped is in tax collection. Because taxes are a fraction of nominal incomes, inflation-aided higher nominal GDP growth has given a boost to the union government’s tax collection so far. Data from the Controller General of Accounts (CGA) shows that the union government’s Gross Tax Revenue in the current fiscal year until October has grown by 18% compared to the previous year. Corporation tax collections, which are levied on profits, have shown an even higher growth of 24% in this period. This rally might not continue in the rest of the fiscal year as both inflation and growth show signs of moderation. To be sure, the government is likely to exceed its budget estimate of Gross Tax Revenue which will be a much needed cushion given the additional spending commitments on account of spending on the Pradhan Mantri Garib Kalyan Yojna and fertilizer subsidy. 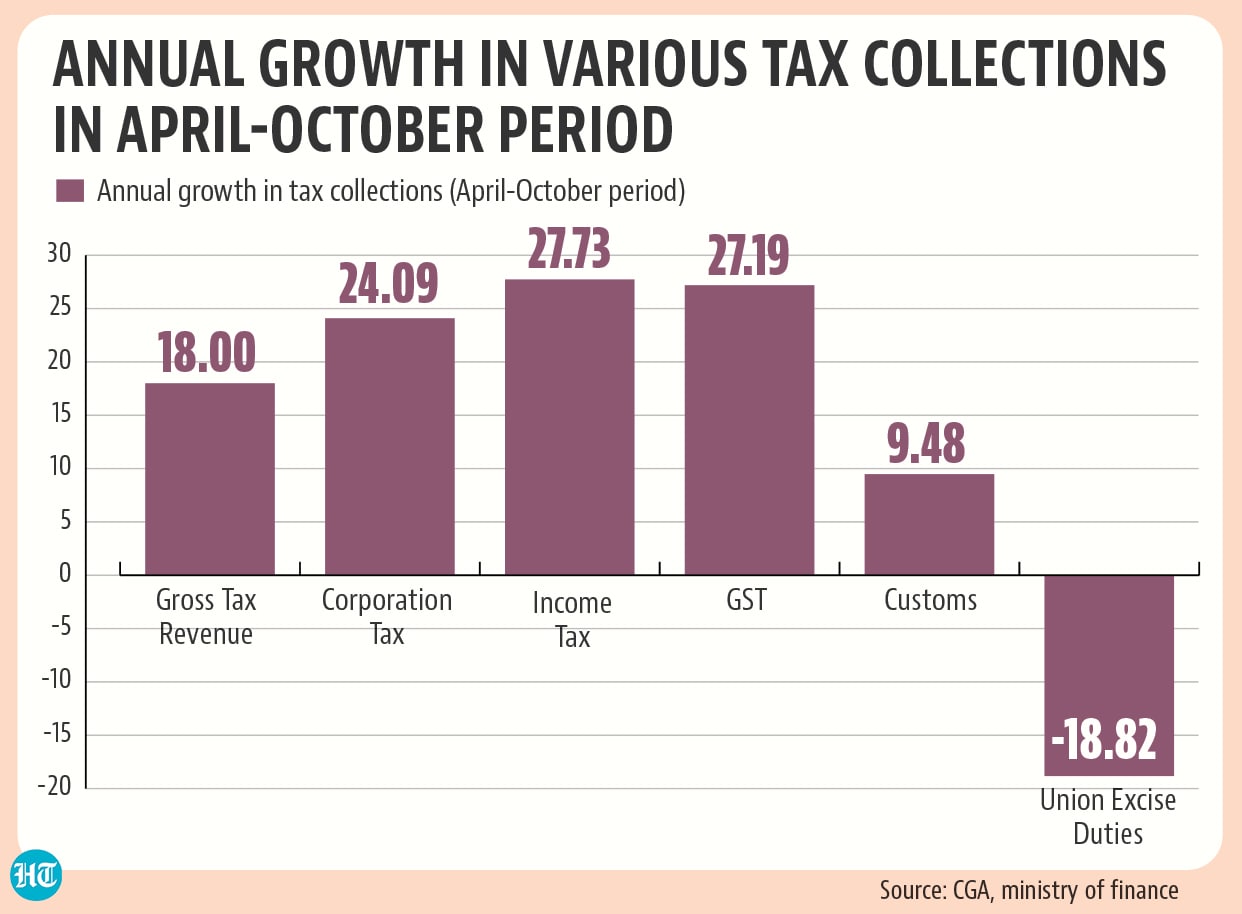