Over the past week, the Covid-19 outbreak in China has dominated headlines. Following a record surge in cases, all major cities, including Beijing and Shanghai, have been put under some form of lockdown, forcing people to hit the streets in a rare outburst of public anger against the government.

Over the past week, the Covid-19 outbreak in China has dominated headlines. Following a record surge in cases, all major cities, including Beijing and Shanghai, have been put under some form of lockdown, forcing people to hit the streets in a rare outburst of public anger against the government.

Covid cases in the country are the highest ever on record, yet deaths are not – a trend that should not be surprising, as many countries have experienced this during Omicron waves this year. This begs the question: Why does Beijing prefer hard lockdowns when experience across the world has shown that vaccines have made these irrelevant? Here are some charts that explain the latest Chinese Covid-19 outbreak.

Cases have touched a record high, yet deaths remain at a near-record low

On Sunday, there were 38,503 new infections recorded across China – the highest ever in a single day. This number was up from 31,928 new cases on Saturday and 34,398 on Friday (also a record high till then). The seven-day average of daily infections (a number which denotes the case curve) has now touched 27,620 – surpassing the peak of 26,570 touched in April when Shanghai locked down amid an out-of-control surge.

While the current number of daily infections may be the highest eve, the number of deaths appear to be far lower. There have been three reported deaths in the past week, and seven fatalities in the last 30 days. The seven-day average of deaths currently stands at 0.4 a day. In the April surge, for context, this number jumped to an average of around 53 deaths a day. 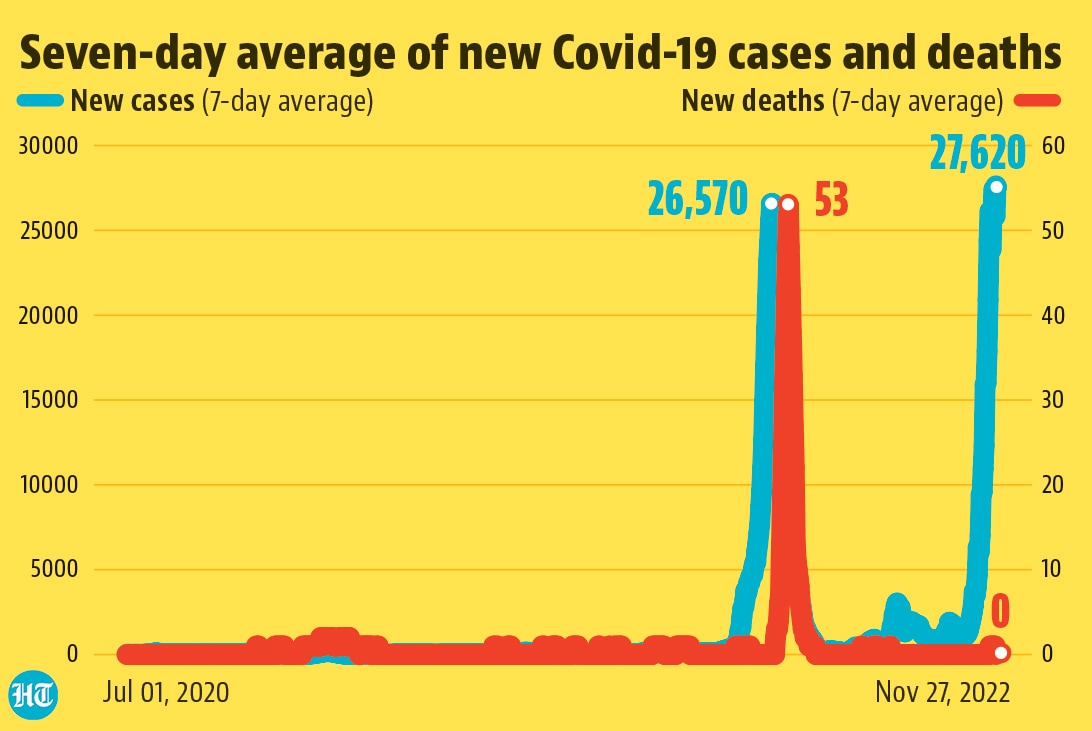 China remains under heavy curbs, even as the world walks free thanks to vaccines

Protests against the strict lockdown have now spilled into the third day, and are quickly spreading across the country. According to numbers crunched by Nomura Holdings, at least 49 cities have various levels of lockdown in place, impacting around 412 million people and activities that account for almost a quarter of the country’s GDP.

To understand this, one needs to reflect on the prolonged duration of Covid lockdowns that the Chinese people have experienced – especially in comparison how the rest of the world has experienced them. Nearly three years into the pandemic, China has stuck with enforcing mobility curbs that other countries dropped months (if not years) ago. A look data from the Oxford Covid-19 Government Response Tracker, which records the strictness of government policies based on nine indicators including schools, offices, travel bans, highlights the prolonged nature of Chinese curbs. This shows that China currently has curbs of 62.5 on a scale of 0 to 100 (100 being the strictest). The rest of the world had similarly strict curbs more than a year and a half ago in March 2021 – at a time when the Delta wave was ravaging most nations. 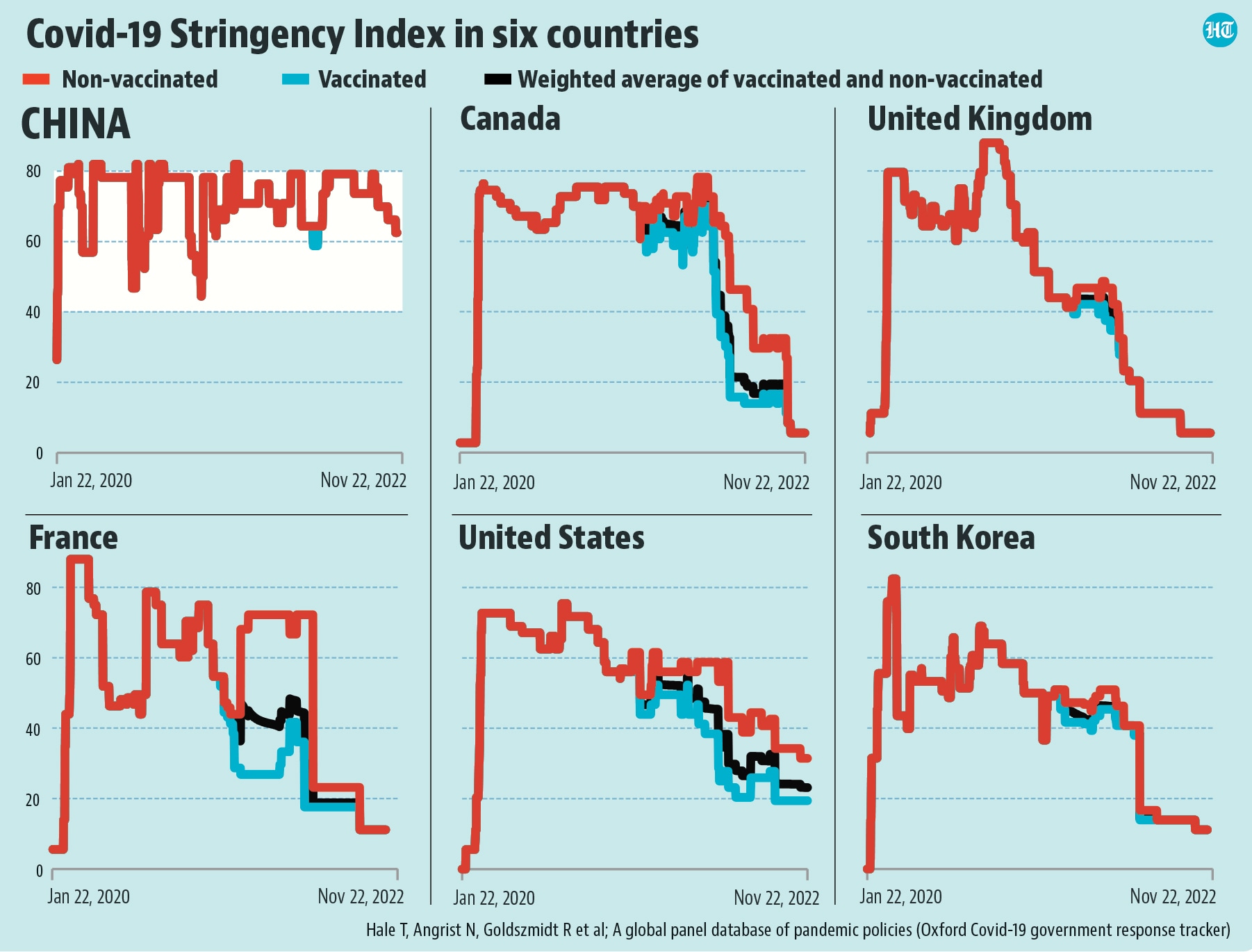 So, what then explains such a major deviation in deaths? Is it the near-continuous lockdown, was there a significant jump in vaccination, is the strain of virus behind this wave milder, or is there something more than meets the eye?

First, let’s look at curbs. As chart 2 shows above, China currently stands at 62.5 on the Oxford stringency index. During the April surge, when deaths hit an all-time high, the stringency index stood at 79.2 – meaning that deaths being low right now has little to do with curbs.

Now, vaccination. China has gone from 230 doses per million in early April to around 240 in November. A marginal increase (4.3%) is unlikely to have caused a plunge in deaths. A deeper dive into the official death numbers raises more questions than answers. Three deaths in a country the size of China during a week that has seen the most infections ever is suspiciously low, especially considering the opaque nature of data from the country.

Let’s look at case fatality rate (CFR). First some context: India’s CFR in 2022 has been around 0.5% thanks to the much milder Omicron surge. In the United States, this number has been 0.6%, and it is 0.3% in Britain.

During the April surge, at the peak rate of deaths, China’s CFR was around 0.2% . And the current numbers from China are lower still – the CFR of deaths in the past week calculated from cases reported two weeks prior to that is 0.004%. Even if the country was seeing the rather optimistic CFR of 0.2% it would be reporting at least 22 deaths a day (compared to around 0.4 deaths a day being reported) right now. 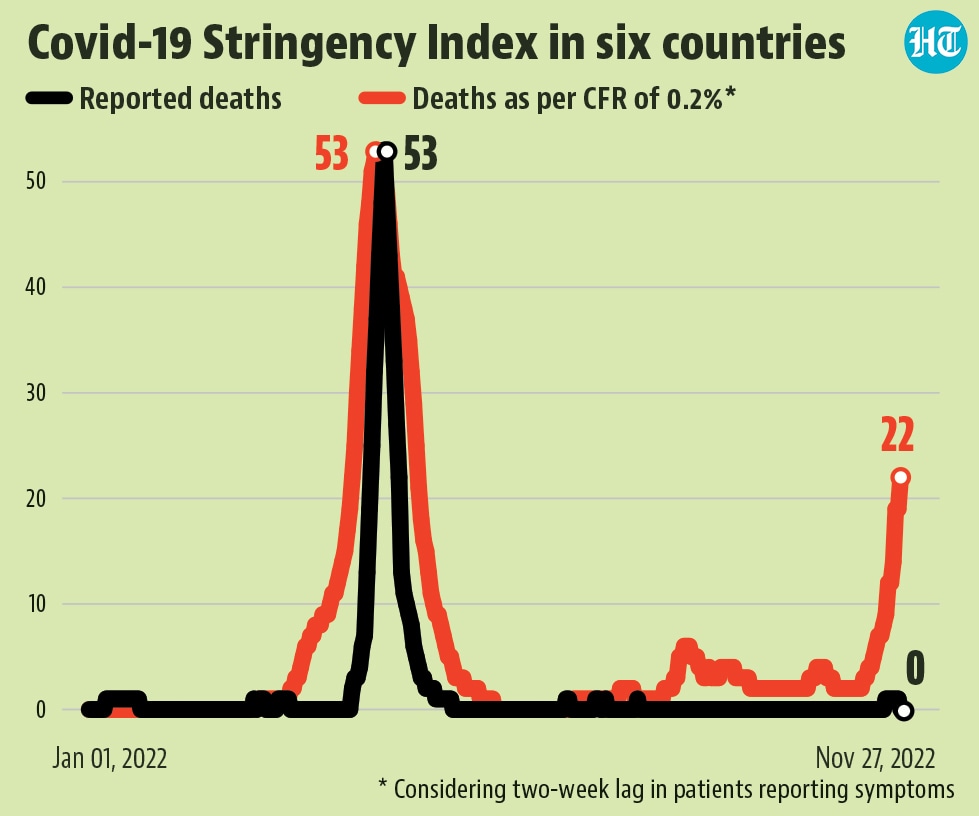 In the absence of access to clear data, any deep analysis from China will remain a matter of speculation. But on the face of it, China’s “Zero-Covid” approach appears far more heavy-handed than required (as every other country has returned to normalcy despite case surges) unless things are worse than official data shows. After all, the low efficacy of China’s Covid vaccines is now a matter of scientific record, and a succession of reports have pointed to the fact that there has been remarkable reluctance to be vaccinated among people over the age of 80 in the country.

It will be interesting to see whether the protests force Beijing to relax its policy or it sticks to its opaque approach.