Women and the menace of intimate partner violence

The gruesome case involving 26-year old Shraddha Walkar, allegedly killed by her partner Aaftab Amin Poonawala has brought to fore the menace of intimate partner violence in the country.

The gruesome case involving 26-year old Shraddha Walkar, allegedly killed by her partner Aaftab Amin Poonawala has brought to fore the menace of intimate partner violence in the country. An HT analysis of various statistics shows that the problem is widespread, increases with age and seems to be more pervasive in India than previously believed. While access to education reduces the likelihood of intimate partner violence against women, the latest case shows it can happen in almost any strata of society. Here are five charts that explain this argument in detail.

The National Family Health Survey (NFHS) provides comprehensive estimates on Indian women’s experience of physical or sexual violence since the age of 15 (the survey was conducted in the 18-49 years age group, and respondents were asked about incidence of violence since they were 15). The fifth NFHS round (2019-21) shows that 31.5% of Indian women in the 18-49 age group had experienced such violence at least once. This number is slightly higher than the 2015-16 value but lower than the 2005-06 number. To be sure, the latest NFHS report says that the numbers are not strictly comparable with fourth NFHS round because it sought these responses for women in the 15-49 age group. These numbers are extremely sensitive to reporting errors and could be underestimates. The report says that only one woman per household was selected for this module and responses were only sought if she had the privacy to answer the questions. What increases women’s susceptibility to intimate partner violence the most?

NFHS data shows that multiple factors affect the likelihood of such violence against women. While 18.3% of women aged between 18 and 19 have suffered sexual or physical violence either in the last year or in their lifetime, this number increases with the age of the women (to 35.3%) till the 30-39 year age group. To be sure, it does come down slightly in the 40-49 age group (35.2%). Rural women are far more likely to have suffered physical or sexual violence than their urban counterparts. Higher educational and income levels do help bring down the likelihood of physical violence against women, but as the Shraddha case shows, it does not eliminate it. What it interesting is that such violence against women also shows a large variation across states. Karnataka, with 48.5% of abused women, tops the list in the likelihood of women’s susceptibility to domestic violence either in her lifetime or in the past one year. Bihar ranks second in the list with 43.1% , followed by Tamil Nadu at 42.9%, and Telangana at 40.1%. These results are counter-intuitive because Tamil Nadu and Karnataka boast among the best social indicators in the country; and Bihar, among the worst. To be sure, this number is 9.7% in Kerala, another state which tops in terms of social indicator rankings. 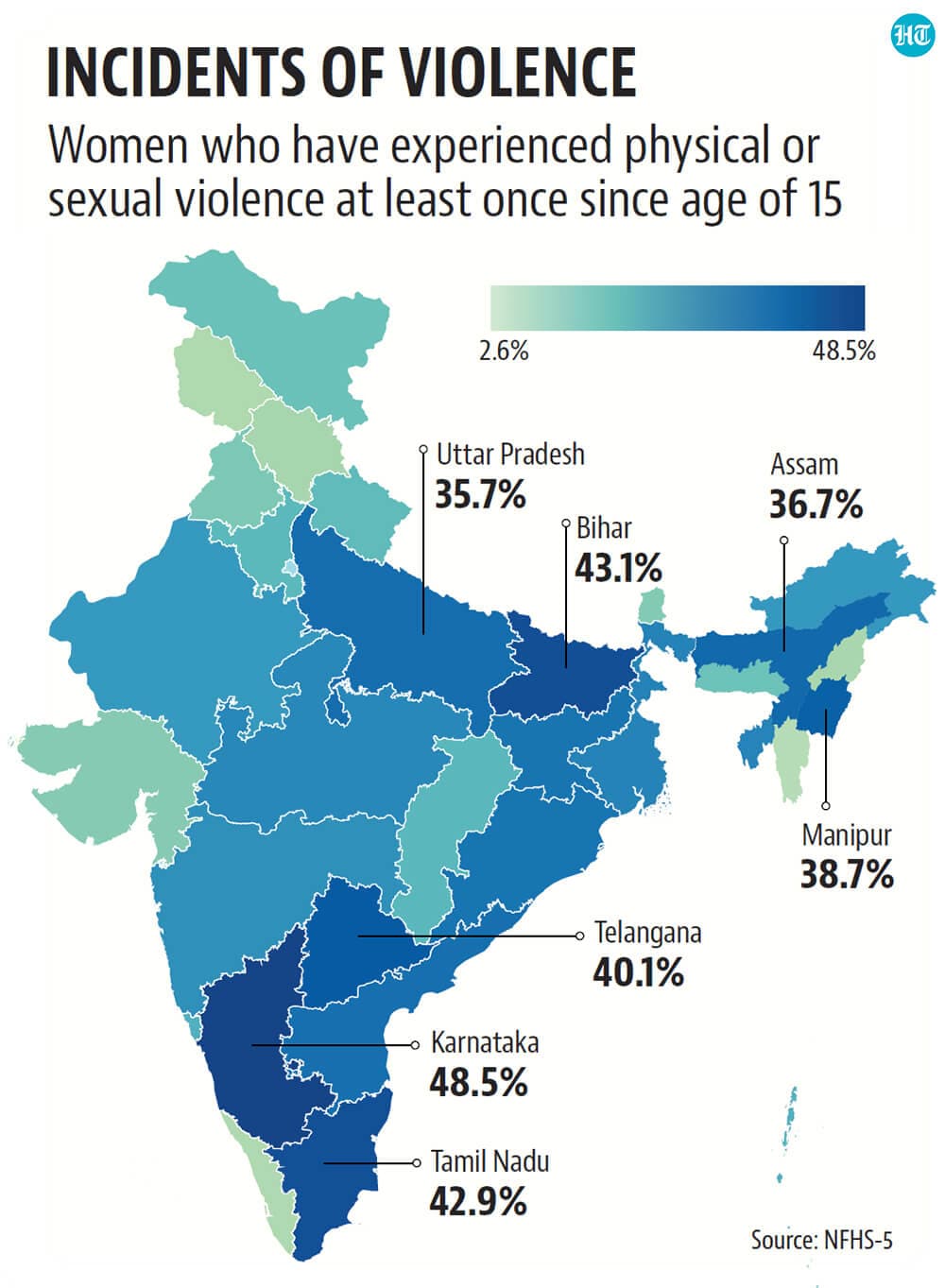 Where does India stand globally in intimate partner violence?

The World Health Organisation’s Global Database on the Prevalence of Violence Against Women provides a consolidated global database on the prevalence of intimate partner violence in 158 countries of the world. These numbers are based on the latest national level surveys conducted during the period 2000 to 2018. More recent data is not available. WHO records the self-reported responses of women who have experienced one or more acts of physical or sexual violence or both by a current or former husband or male intimate partner (informal relationships) since the age of 15.

WHO data shows that 18% of Indian women aged between the ages of 15 to 49 suffered at least one form of intimate partner violence in the preceding 12 months. This figure puts India in the 33rd highest spot within 156 countries for which a comparable estimate was available. To put things in perspective, Indian women are less susceptible to intimate partner violence than women in Bangladesh (23%) and Afghanistan (35%), but more susceptible than Pakistan (16%), Nepal (11%) and Sri Lanka (4%), and major industrialised nations in the world. Can law provide justice to the victims of domestic violence?

To protect victims of domestic violence, the Protection of Women from Domestic Violence Act was enacted for the first time in 2005. The 2021 Crime in India report shows that in crimes booked under the category of domestic violence, charges were framed before a court in 92.5% of the cases, although the conviction rate was only 30.4%.